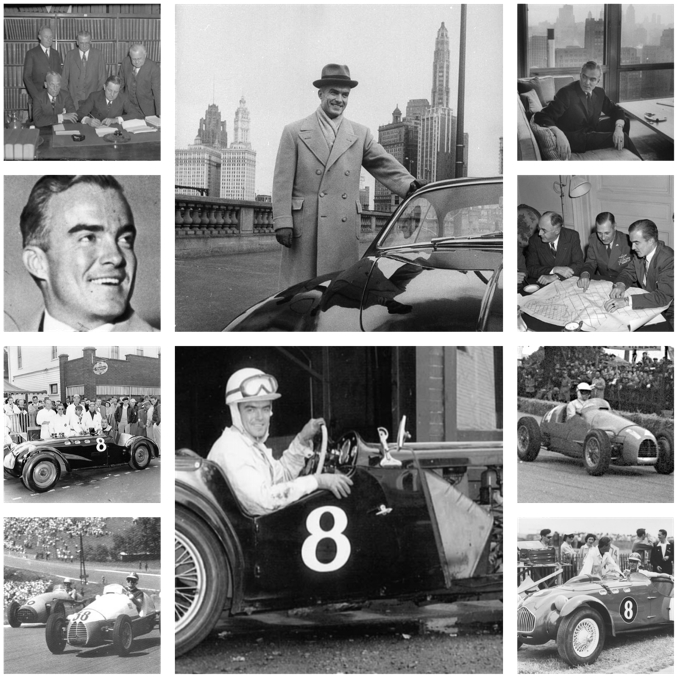 An avid racing enthusiast, jazz musician, and entrepreneur, Fred Wacker was the second American ever to race in the Formula 1 World Championship. However, it was as a successful industrialist how he earned his fame and fortune.

Upon graduating from Yale, Fred worked for AC Delco before joining the U.S. Navy in 1943 as a Senior Fighter Director Officer on the aircraft carrier USS Shamrock Bay during World War-II. In 1948, Fred began building his engineering empire as President of Ammco Tools while concurrently indulging in his passion for racing as President of the Sports Car Club of America. During that time he also competed in multiple LeMans and Grand Prix events including five Formula One world championships. Fred survived several crashes including a high speed crash at famous Nürburgring.

After retiring from racing in 1954, Fred Wacker founded the Liquid Controls Corporation with George Richards upon developing and patenting the first tri-rotor high-flow meter for the U.S. Air Force. He remained actively involved with the business for over 40 years and was instrumental in making Liquid Controls the global leader in flow meter technology that they are today.

As an IDEX Energy, Advanced Flow Solutions (AFS) brand, Liquid Controls is the global market leader in precision measuring systems providing highly engineered and differentiated products used in custody transfer of highly valuable refined fuels and liquids. From its start in 1954, Liquid Controls has been dedicated to providing high-quality flow meters and accessories for accurate liquid measurement in custody transfer applications. Beginning from the original military aircraft fueling requirement, we now serve a wide variety of applications and markets.

Our manufacturing team is made of the most highly skilled craftspeople in the region, all working together each day to assure that personal care goes into each task that makes up an LC product. We rely on a strong combination of in-house engineered designs and a network of strategically located factory authorized full-service distributors to ensure that our customers around the world are supported with technology tailored to each industry’s particular requirements.

We are more than just the products and services we provide. When you choose Liquid Controls, you are also choosing our values:

Trust – we make and keep commitments to our customers, our channel, our supply chain, and ourselves.

Team – we win together with integrity embrace diversity and put service before self.

Excellence – we act with discipline and focus, we make a positive impact, and we build a legacy of greatness.

We thank you for choosing Liquid Controls first when accuracy counts.